According to the Azande oral literatures passed on from generation to generations until present, the first Azande arrived in the Azandeland area starting in the mid-2nd millennium BCE through mass Bantus north & eastbound immigration movement and they started to settled permanently in the area we call today The Democratic Republic of the Congo (Zaire), Central African Republic and Republic of South Sudan (Equatoria) . The Azande settlement seem to have spread eastbound, but the Sudanese raids halted some of northbound expansion in the 19th century . The settler’s inhabitant area of origin is unknown, but historians claimed the Azande might have immigrated north and/or eastbound from Southern/West African belt or simply might have been the original natives of the land.

In the 15th century A.D, the Azande sub-clan of Avungara ruled over the Bandia and the two groups formed what is known to us today as, “The Azande People”. The Azande lives in the savannas climate in the Azandeland formerly known to us as Mbomuland of which is known today as: The Northwest Democratic Republic of the Congo (Zaire), Southeast Central African Republic and Western Equatoria of South Sudan.

King Gbudwe who ruled western part of Equatoria (within Leopold II Congo Free State or Lado Enclave) at the time as a king of the Azande Kingdom despised the Arab culture and their way of life. He encouraged the Azande tribe to resist the invaders with aimed to protect the Azande African Cultural Heritage and the African lifestyle. The European and Arab invader seem to have met with such stiff resistances from other Equatorian tribes such as: The Bari, Lokoya, Pari, Otuho and many other Equatorian tribes.

Due to King Gbudwe resistance to the European and Arab invasion of Africa in the 1800’s, he fought vicious civil wars with his brothers after the death of his father Bazingbii and after consolidating his power, he went on to win several battles against the British, Arabs and the French invaders.

In 1882, after the British, Arabs and French disastrously unsuccessful attempts to invade the Azande kingdom under King Gbudwe, an official expedition was sent against him by the Egyptian Authorities in the Bahr El Ghazal Province of Sudan, whose governor at the time was an Englishman Lupton Bey. The Egyptian with help of Azande rivals the king was captured and imprisoned. In the following year, the Mahdists overran Western Equatoria and they decided to release the king. King Gbudwe went back to Burekiwe (Yambio) and supervised the extermination of all the Arabs who were left in his kingdom (Zandeland).

Apparently, the Mahdists left King Gbudwe alone until 1898 and after their own regime was destroyed at the battle of Omdurman, they sent an army under the command of Arabi Dafalla Pasha to deal with the king. King Gbudwe soundly defeated those forces at the battle of Burekiwe (Yambio) . By this time, however, the main threat did not seem to be coming from Arabs alone, but from other three European super powers “The British, France, French-Belgium King Leopold’s Congo Free State” whose spheres of interest met in the Azandeland.

In 1904, King Gbudwe was persuaded to lead an attack on some forth which the Belgians had built in his territory, even though-due to his policy of hostilities towards foreigners-he fail to acquire significant numbers of firearms and this resulted of the Azande being assaulted and was beaten off with heavy causalities.

In the aftermath of the battle, many of King Gbudwe vassals defected to the Belgians, French and the British, the combinations of heavy causalities and demoralization finally weaken the once mighty conqueror. With the British approaches to Yambio, King Gbudwe’s army and citizens seem to have fled the town and King Gbudwe was found sitting all alone by his hut’s door.

It is not clear whether the king was shot by the enemies or he killed himself deliberately before his enemies reached out to him. But he was presumed dead while the enemies approached him. King Gbudwe is believed to have been the only king buried with 4 beautiful live ladies seated on each 4 sides of the grave corners.

In 1910, following the Belgian annexation of the Congo Free State as the Belgian Congo in 1908 and after the death of the Belgian King in December 1909, the British authority officially reclaimed the former part of the Azandeland kingdom which fall in, The Republic of South Sudan “Equatoria” together with Lado Enclave as per the Anglo-Congolese treaty signed in 1894 and added the territory into the Anglo-Egyptian Sudan. Equatoria was renamed back as, (Equatoria) , the 8th province of Egypt and was administer by British.

You Have the Power to save the Azande Culture 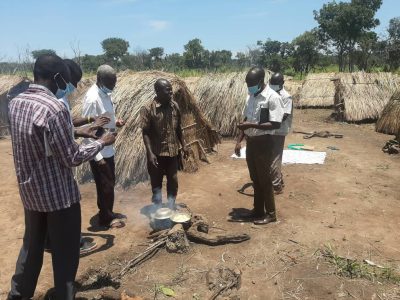 The Azande lives in a widely scattered family homestead and their settlements consist of a single household made up of man and his wife or wives. Polygamy was and are still commonly practice among the Azande people and is not related to the Arabs or Islamic culture.

In the past, men especially the nobles had so many wives that makes it so difficult for the younger men especially the commoners to marry multiple wives and adulteries were/are usually heavily punished in the community. In early days, marriages were contracted by gift of spears, arrows and Gita Azande (Azande Hoe) by the bridegroom to the family of the bride. Girls were married at a very young age and sometimes affianced few hours after their birth.

The types of houses that the Azande build are made out from mud and grass, which are framed around wooden poles or a simple mud and thatched top of the house with grass. Each household are built around courtyard so that the people can gather and converse with each other. Adjacent to these courtyards are kitchen, toilet, gardens (farms) that are for crops such as: pineapples, groundnuts, sweet potatoes, cassava, millet, palm and mango trees which does not require large scale farming.